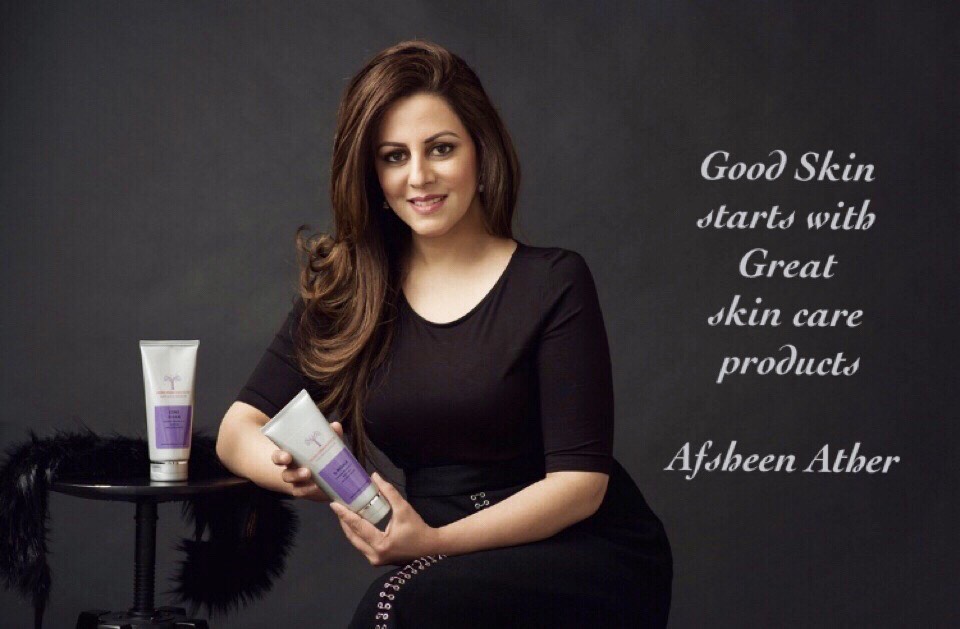 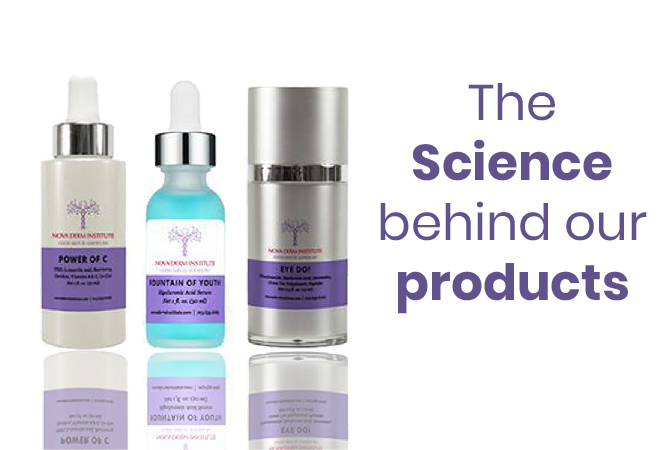 Nova Derm Institute skin care product line is a Smart Skin care system. Our product line is specially formulated with Green Tea Polyphenols, the most potent antioxidants known. Therapeutic skin effects are coming from the polyphenols, green tea leaf extract(camellia sinensis). This formula has 90% purified polyphenols which is the highest form available in the market. Vitamin C in our products is encapsulated , so it does not change color or get oxidized , so keep its efficacy till the last drop in your bottle. Our time release retinols are pharmaceutical grade , and will minimize lines and wrinkles and possible signs of aging leaving you with more firmer smoother and more even toned skin. Our eye cream Eye Do, is an innovative treatment, clinically proven to reduce the appearance of lines, wrinkles, puffiness and under-eye dark circles. All our products are Hypoallergenic, Non-comedogenic, and Free of Artificial Dyes. All products are Paraben Free, Fragrance Free, Gluten free and Cruelty Free, and is prepared in a FDA approved lab in the USA. 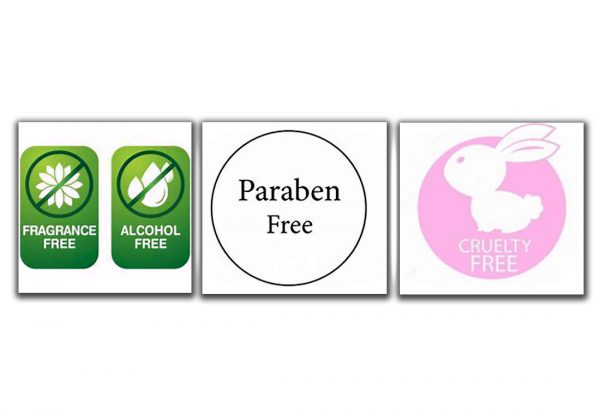 WHAT IS HYALURONIC ACID?

Hyaluronic Acid, also known as “the water molecule,” is a powerful hydrator that locks in moisture, diminishes the signs of aging and plumps the skin.

A NATURAL OCCURRING SUBSTANCE FOUND in the BODY

Hyaluronic Acid (HA) is a natural occurring substance in the body that plays a vital role in keeping our skin youthfully hydrated. Hyaluronic Acid is powerful humectant (an element that attracts and binds water molecules together) with the amazing ability to hold up to 1000 times its weight in water. As we get older, natural levels of Hyaluronic Acid decrease and our skin loses it moisture.

HYDRATION is the FOUNDATION of HEALTHY SKIN

According to research published in the Journal of Drugs in Dermatology, “One of the main characteristics of youthful skin is its large capacity to retain water, and this decreases significantly as we age.”¹ Skincare scientist believe this decrease in Hyaluronic Acid “accounts for “some of the most striking alterations of the aged skin,”² such as:

THE SCIENCE OF HYALURONIC ACID

THE SCIENCE of HYALURONIC ACID

Numerous scientific studies validate claims that Hyaluronic Acid is a “miracle moisturizer.” When topically applied to the skin, Hyaluronic acid grabs water molecules out of the environment and binds them to the skin “increasing the water content of epidermis.”¹  This delivers incredible benefits to the skin.

A study published in the Journal of Clinical and Aesthetic Dermatology on the “Efficacy of a New Topical Nano-hyaluronic Acid in Humans” found “a statistically significant moisturizing effect was observed with hyaluronic acid” and skin treated with HA was “up to 96%” more hydrated than untreated skin.³

Not only does Hyaluronic acid moisturize the skin, it keeps the skin hydrated by locking in that moisture. According to clinical observations, applying Hyaluronic acid “forms a protective layer which provides a barrier preventing transdermal water loss.”¹

Besides moisturizing and hydrating the skin, the binding of water molecules around hyaluronic acid produces a swelling effect that plumps up the skin, improves firmness and increases pliability.

Various studies measuring the effects of topical Hyaluronic acid conclude, “HA was associated with significant reduction of wrinkle depth.”⁴ With one group of researchers reporting a “decrease the depth of wrinkles (up to 40 %.)”³

SAFE ON ALL SKIN TYPES*

Besides being incredibly effective, skincare products, Hyaluronic acid doesn’t feel greasy and is safe on oily skin types. In addition, researchers theorize that because “HA has no species specificity” it “does not pose any risk of allergy.”¹

Retinol is a powerful derivative of Vitamin A,  and synonymous with high end, anti-aging skin care. The molecules in our retinol formula are small enough to penetrate deep into the sub-dermal layer of the skin to benefit the skin on many levels.

Retinol promotes the regeneration of new skin cells. This stimulates cellular turnover as the skin sloughs off its dead or damaged outer layer and replaces it with the fresher, healthier layer of skin cells. This natural exfoliation softens fine lines, repairs hyperpigmentation, makes complexions more radiant and can even shrink the appearance of pores. In addition, Retinol stimulates collagen and elastin production, helping the skin become stronger, more flexible, and firmer.

THE SCIENCE OF RETINOL

Scientific studies demonstrate the “topical application of retinol significantly affects both cellular and molecular properties of the epidermis and dermis,”¹ revitalizing many important skin functions that breakdown as we age.

When absorbed by the body, retinol is converted into the active form of Vitamin A, retinoic acid. The body uses this retinoic acid to “synthesize collagen”² the proteins responsible for maintaining the strength, flexibility and elasticity of skin. This provides impressive anti-aging results, helping skin look healthier, younger, firmer, and more supple.

Retinol regenerates new skin cells, triggering cellular turnover which allows the body to naturally exfoliate dead and damaged skin cells that accumulate on the skin’s surface. This cleanses the skin of debris that clogs pores and leads to acne, revitalizes complexion by getting rid of dead and damaged skin cells that leave skin looking dull and splotchy. Exfoliating also minimizes the appearance of aging by smoothing fine lines and diminishing sun spots.

Findings published in the Journal of Dermatological Therapy report “Retinoids are capable not only of repairing photoaged skin at both the clinical and biochemical levels but their use may prevent photoaging.” This means Retinol can help correct hyperpigmentation as well as brown spots that result from UV exposure. Retinol’s ability to stimulate cellular turnover exfoliates minor discolorations away. Retinol also contains a photo protective antioxidant that helps protect against brown spots from forming in the future.

WHAT IS KOJIC ACID?

THE SCIENCE OF KOJIC ACID?

Clinical research supports the use of Kojic Acid in “cosmetic formulations and to treat hyperpigmentation.”² According to researchers published in the journal of Regulatory Toxicology and Pharmacology,” kojic acid works in dermatology applications by disrupting melanin skin-pigment biochemistry.”¹  Researchers published in the Journal of Biomedicine and Biotechnology further elaborate saying that Kojic Acid  offers “safe and nontoxic depigmenting agents with a satisfactory inhibitory effect on melanin formation and tyrosinase activity.”² Specifically, Kojic Acid suppresses tyrosinase, the enzyme that reacts with tyrosine, the amino acid necessary for the production of melanin. In simpler terms, Kojic Acid lightens dark patches of skin by breaking down melanin and preventing the production of melanin.

Besides preventing the production of melanin, Kojic Acid is a favored skin lightening ingredient because of it shape and molecular makeup. According to clinical findings published in Clinical and Aesthetic Dermatology, Kojic Acid’s “stable derivatives increase skin penetration, which offers better skin lightening.”¹

Basically, Kojic Acid has a small molecular composition that allows it to deeply penetrate the skin into the cellular levels of the epidermis where melanin is synthesized, improving its ability to lighten hyperpigmentation.

WHAT IS GLYCOLIC ACID?

Glycolic acid is the most popular Alpha Hydroxy Acid (AHA) utilized in skincare. It is derived from fruits or sugar cane. One reason Glycolic acid is so popular is due to its small molecular size, which allows it deeply penetrate the skin and fit into microscopic spaces that other skin care ingredients are too large to fit in. Glycolic Acid is shown to smooth dry and rough skin, gently exfoliate, moisturize, even out skin tone and minimize the appearance of sun damage.

THE SCIENCE OF GLYCOLIC ACID

According to “Over-the-counter- Acne Treatments: A Review,” a publication in The Journal of Clinical and Aesthetic Dermatology, Glycolic acid, and similar alpha hydroxy acids, benefit the skin by “by thinning the stratum corneum, promoting epidermolysis, dispersing basal layer melanin, and increasing collagen synthesis within the dermis.”

By thinning the stratum corneum (outer most layer of epidermis) and promoting epidermolysis, Glycolic acid is a gentle, yet effective exfoliator. It works to remove the outer layer of dead skin cells by dissolving the “glue” such as sebum (the oil your skin produces) that binds skin cells together. Once the dead skin cells have been broken up they are easily brushed away, revealing healthier, smoother, more radiant skin lying below.¹

Glycolic acid doesn’t stop helping once it has broken up dead skin cells and aided in their exfoliation. Glycolic acid is so small the molecule can penetrate the cell wall. Once inside the skin cell, it goes to work triggering the production of collagen and synthesizes dermal Glycosaminoglycan, more commonly known as GAGs. Gags are a part of the skin tissue matrix, along with collagen and elastin. Though Gags are less known compared to collagen and elastin, they are very important for maintain skin health and appearance. They support the protein fibers that make up collagen and elastin. Gags also retain moisture, which supports skin turgidity (bounce.)

This is supported in scientific studies. For example, on study showed “patients that applied 25% glycolic, acid for six months had an approximately 25-percent increase in both epidermal and dermal thickness. “ Furthermore, the study showed “improved quality of elastic fibers, and increased density of collagen.”